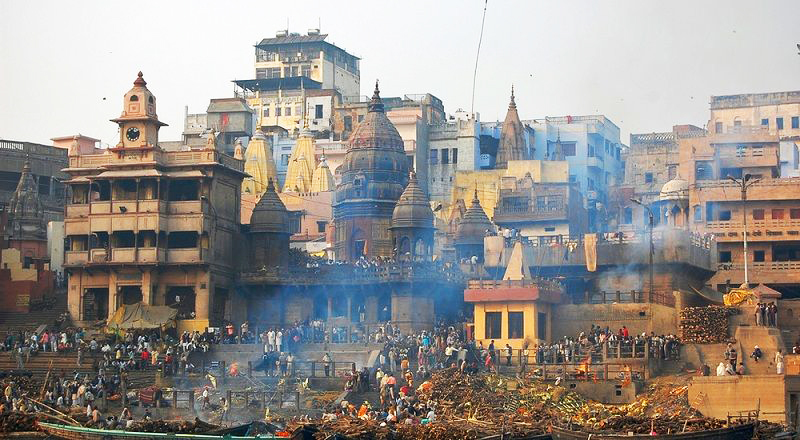 Of the 87 well-known ghats of Varanasi Manikarnika Ghat is one of the most prominent in more ways than one.

One of the most well-known, sacred and oldest ghats of the ancient city of Varanasi, Manikarnika Ghat is the main burning ghat and one of most auspicious places where a Hindu can be cremated.

It is a Hindu belief that whosoever is cremated at this ghat will attain moksha, or salvation, and the soul of the dead shall become one with Lord Shiva. In Hinduism, death is considered to be the beginning of another life which is pre determined by one’s karma. But those who attain moksha are relieved from the cycle of rebirth and become one with the Maker. Based on this belief, hundreds of old devotees travel to Varanasi to die there and be cremated at Manikarnika Ghat in the hope of attaining salvation.

Manikarna in Sanskrit means earring. There are several mythological tales about the origin of the Ghat. In popular belief, Manikarnika Ghat is associated with Lord Vishnu and Lord Shiva and there are stories related to both the gods.

According to one, to ensure that Lord Shiva stayed close to her and did not go anywhere far away, Goddess Parvati hid her earrings here and asked Shiva to find them saying they had been lost on the banks of the Ganges. And so even today, whenever a body gets cremated at the Manikarnika Ghat, Lord Shiva asks the soul whether it has seen the earrings.

According to another legend, it is believed to be the place where Lord Vishnu dug a pit with his Chakraand and filled it with his perspiration while performing various penances. As he did so his earring fell into the pit thus giving the place its name, Manikarnika. This story is supported by the presence of a holy pond named, Chakra-Pushkarini Kund (Manikarnika Kund) at this ghat which is believed to have been dug by Lord Vishnu. It is said that this kund existed before the origin of the Ganges, and that the charanapaduka (footwear /footprint) of Lord Vishnu is here on a circular marble slab, as Lord Vishnu meditated for many years at this ghat.

Yet another legend talks of the death of Sati, consort of Lord Shiva. When Shiva was inconsolable Vishnu sent his divine chakra to disintegrate Sati’s body into 51 parts, each of which fell on the earth. Lord Shiva established a Shakti Peeth wherever Sati’s body had reached. Sati’s earring is said to have fallen at Manikarnika Ghat.

Lying at the center of the five tirthas, Manikarnika Ghat symbolizes both creation and destruction. Being one of the oldest ghats in Varanasi, Manikarnika Ghat is mentioned in a Gupta inscription of the 5th century. Manikarnika Ghat is also famous for the temple of Lord Shiva and Mata Durga which was built around 1850 by the Maharaja of the Awadh. This temple has become a landmark of this Ghat.

Some believe that Manikarnika Ghat is named after Jhansi ki Rani Laxmibhai whose name was Manikarnika before she became the Queen of Jhansi.

Approximately 28,000 bodies are cremated at Manikarnika Ghat every year! The Ghat offers a fascinating insight into rituals related to death as well as beliefs of after-life. Manikarnika Ghat brings a casual visitor close to death in a surreal manner providing ample food for thought about the cycle of rebirth and the futility of life as we know it.

Any number of priests and tourist guides offer a tour of the Ghat and a view of cremation ceremonies and burning bodies from a vantage from one of the upper floors of some buildings in the vicinity.

A well informed decision is advised before embarking on such a tour. The sights, sounds and smells of Manikarnika Ghat are certainly not for the faint-hearted.